John's career in the law started aged just 17 years old when he took a position as Articled Clerk at Sitwell, Money and Murdoch Solicitors in Truro, Cornwall in 1963.

He went on to partially complete his training for them before moving to Torquay in 1967 where he completed his training with Almy and Thomas, Qualifying in 1970 and then joining Langdon and Company becoming a partner in 1973.

In 1983 John set up John Darby & Co. The practice started in the spare bedroom of a thatched cottage in Shiphay, later moving to the current premises in 1985 working with his wife, Sue, as secretary and cashier.

John, having been trained in general practice, continued dealing with most aspects of the law throughout his career. He is the longest serving duty solicitor in Torbay and has dealt with various high profile cases in the UK.

John and Sue had two children, Ben and Kathryn, both of whom followed in their fathers footsteps qualifying as solicitors and Ben is, of course, now partner in the firm.

John continues to deal with both long established and new clients in all aspects of legal work, but in particular conveyancing and matrimonial. 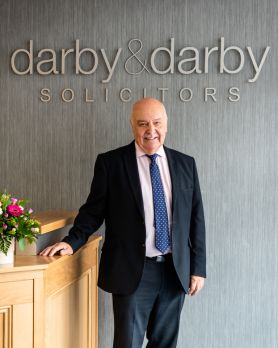